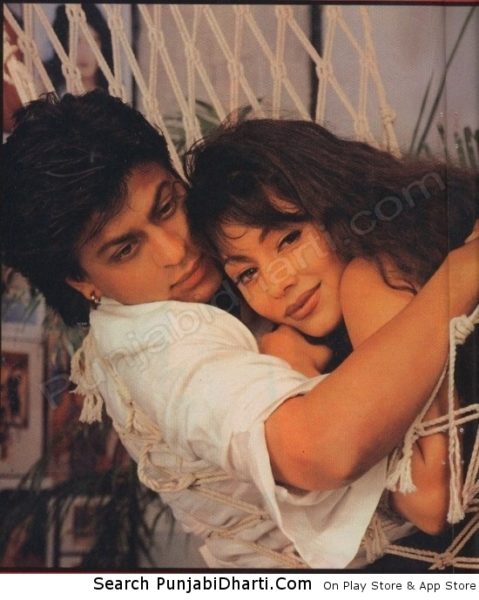 Shahrukh’s personal story can never be complete if one were not to talk about his romance and subsequent marriage with Gauri Chhiba, the daughter of retired Major Ramesh Chhiba, who had been born a vegetarian, was a Hindu Brahmin, and even had a temple within his house. Shahrukh being a Muslim in India where religion plays a key role while deciding the destiny of marital alliances, his marrying Gauri whom he had met in 1984 and eventually married in 1991 was indeed a tough task to accomplish.

The relationship between the two had been kept under wraps, and understandably so because Gauri’s parents would not have accepted it. Or, so it seemed for quite some time even while the twosome continued to meet up for six long years. The youngest in a Punjabi joint family with around 15 members, that Gauri would marry someone from her community was a foregone conclusion.

As for Shahrukh, he was willing to do anything to get her in his life, and it is said that he had entered Gauri’s household by posing as Abhimanyu during the girl’s birthdayparty. Abhimanyu…. Who? Yes! The character that Shahrukh had just started to play in the television serial Fauji that was being directed by the retired Lieutenant Colonel Raj Kapoor. The serial based on life in the army had made Shahrukh’s character really popular, and people around even said that he looked quite a bit like Dilip Kumar when he attended the birthday party in Gauri’s house that day.

The story of Shahrukh and Gauri’s relationship continued to add a new chapter with every passing day, and not all of them were bliss-laden as is the case with all human relationships. He was tremendously, in fact uncomfortably possessive about his lady love, so much that he would pick up a quarrel with her even if she let her hair down… literally. Finally, Gauri lost her cool and realized that she wanted to get away from the emotional bedlam in 1989. Without informing Shahrukh, she came down to Mumbai with her pals just a day after the former had celebrated her birthday in his room by decorating it the best way he could have and giving her lots of presents.

It was when Gauri had left for Mumbai that Cupid shot that one decisive arrow. Shahrukh just had gone to the city of dreams where his love had gone, and he ended up telling everything to his mother who was supportive and open-minded as always. Not only did she give her son Rs 10,000, she also advised him to go to Mumbai and get his love back. Shahrukh went there with his friends, and what followed sounds like a chapter straight out of fictional romantic folklore.

he and his friends kept looking for Gauri, and especially around the beachees because of his awareness that she was attracted to them in a big way. On the last day of his stay in Mumbai, since he had run short of financial fuel obviously, a cab guy advised him to go to a place called the Aksa Beach. From there, they ferried across to a place called Gorai and, after searching frantically, managed to track her down when she was standing in the water! Once the duo saw each other, they embraced each other and started crying. That was the defining moment in their relationship, because it was clear to both of them that they need to be with each other all their lives.

The problem the couple apprehended was because of Gauri’s set-up that consisted of simple people who were loyal to Indian social norms and did not question the tenets of tradition: which, in this case, implied that having a son-in-law who belonged to a different religion. This was a thought that would have never crossed their minds. But the time when the twosome had to marry had to surface some day or the other, and that did happen in 1991. The couple went ahead and put up a notice for a court marriage which, according to the Indian marital laws, meant that their names were displayed in front of the court in a notice for one long month.

Shahrukh and Gauri had to hide the notice from their parents, so they did the most obvious thing. They gave a address and said it was their own. The poor fellow had to suffer the repercussions. The parochial among the Hindus made a group and shouted in front of his house, and so did their Muslim counterpart. During those 30 days, the life of his friend was absolutely miserable, but then both Shahrukh and Gauri did not have a choice because they were really concerned about the latter’s parents.

Those 30 days proved to be critical for the young couple. They worked hard towards convincing Gauri’s parents, and eventually managed to make them see their point of view. That they would have a court marriage after the notice period got over was decided upon, and it was on August 26 that this ceremony was finally solemnised in the court. They also got married in keeping with Hindu and Muslim traditions seperately. In fact, it was Gauri who insisted that they should have a Muslim wedding too, and the roots of a secular family set-up had been firmly established be them.

This was the time when Shahrukh was making his initial forays in Bollywood, and among his forthcoming films were Deewana and Raju Bangaya Gentleman while he was shooting for Dil Aashna Hai as well.

My World My Bae